Second is Jonathan Escalante Philips from Cambridge+Coleridge
(winning the Dog and Partridge Tankard) (27:20).

First Lady and first under 18 Girl is Elsbeth Grant from Matlock AC in a
time of 31 mins and 30 secs. Elsbeth wins the Peveril of the Peak Cup.
Second Lady and second under 18 Girl is Alice Crane from Derby Mercury
(33:29) (winning the Cyril Challinor Shield).

First Under 18 boy and fifth overall is Josh Dickenson from City of York in a time of 28 mins and 6 secs. Josh wins the Ian Hall Cup. Second is Alex Ediker from Buxton AC (28:10).

First under 14 boy is Joe Currie from Matlock AC in a a time of 32 mins and 4 secs. Will wins the Mart Cup. Second is Sonny Jamieson from Derby AC (33:23). Although the results originally said 'no U14 girls', we have identified a number of girls (sorry!). Michaela Dick from Matlock AC was the first under 14 girl in a time of 38 mins and 52 secs. Second was Annabelle Bygrave from Sale Harriers (39:46).

The Under 18s and Under 14s did again really well this year and ended near the top ! Fantastic, well done !

First over 60 and winner of the Dorris Allen Salver is Tony Hulme from Wilmslow RC in a time of c38 mins (we had some timing issues at that point).

First local Thorpe lady home and winner of the Matthew Parris Cup for the second time is Annie Round in a time of 40 mins and 13 secs (well done Annie!). We didn't have any men from Thorpe participating this year - they were all helping or of to University!

This year another attempt to give people an accurate time and finishing position. We don't have the funds and don't want the raise the price of the race to allow us to use systems like chips like many other races with similar or larger numbers do. But this means we have to rely on iTunes type software to record the race. We used a program called Webscorer this year. It worked ok, with the exception that because of the terrible weather when the race finished we lost a few minutes of timekeeping when one of the iPADs got wet and in the end went on screen lock. Because of that the timings at some point were just over 3 mins out. We corrected that as good as we can, but it meant unfortunately that the last 150-200 racers dropped of the results and cannot be recovered. Sincere apologies for that. I am sure there are also some wrong positions / missing people in the bulk of the results as typing in over 1,500 runners in the rain and wind is fairly difficult to do!

​We also got notified that some people skipped the queue which means they get an earlier finishing position and in our system a better time (as we record time and position separately, one at the finish and one at the end of the airport style queuing system - this to try to avoid long queues before the finish). We can't really do anything about this, but of course we don't believe this is fair and should be discouraged. 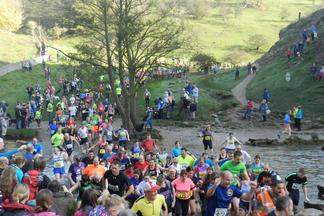