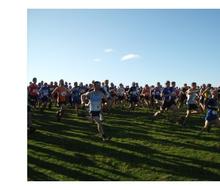 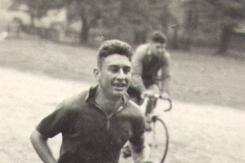 FANTASTIC PHOTO FROM THE

the dash was organised between 1976 and 1987 by john welch of derby mercury running club. he has contributed the following notes on the history of the event:

​"The first Dovedale Dash was held on the Bonfire Party Weekend at Ilam Hall in 1953 and was a challenge race between the cyclists and the walkers of the Derby Mercury Running Club. It was intended to run off the excesses of the party and in the first race there were about 15 runners. The course was from Ilam Hall Youth Hostel, down the path alongside the church to the village, over the river bridge, alongside the Rivers Manifold and Dove to Coldwall Bridge, over the bridge and back alongside the River Dove to cross the river by the stepping stones, returning to Ilam across the fields to finish up the drive to Ilam Youth Hostel.

Over the following years, other hostellers asked if they could join in, and the numbers gradually grew with runners coming on the day just to take part. Inevitably, some of the cyclists, or walkers, or climbers, would also be runners and so the word spread through the running fraternity. Most of the top local runners came along and some of international standing. One such runner, George Rhodes, ran for England on many occasions and won the Dash 3 consecutive times. For this achievement he was allowed to keep the original trophy, presented by our club president Eric Thompson. In reply to this gesture George Rhodes gave the club a cup, the George Rhodes Trophy, to be competed for in future Dashes.

One year, probably in the late 60s, Edgar Smith, the Youth Hostel Warden would not allow us to use the Hostel, so the race was run from the village. As far as I can remember, this is the only year when it has rained for the event. Due to pressure from the villagers, we were back in the hostel the following year.

As the popularity of running increased, so the numbers in the Dash increased until, in 1977 the Youth Hostel Association would not let us use the hostel again. As that was to be the 25th anniversary Dash, it was decided to investigate holding it from Thorpe Pastures and to decide the future on the outcome. The event was a success from our point of view, but with over 700 runners, the farmers were concerned about the stiles and hedgerows. The 4 farmers involved agreed to open suitable field gates for us involving a slight modification to the course, but being a great improvement all round.

In 1986, the ownership of Thorpe Pastures changed from Fitzherberts of Tissington to the National Trust and the nature of yearly negotiations changed."

Relations between Derby Mercury Running Club and the National Trust deteriorated and the club gave up the event, feeling that they could raise the money they needed more easily from club subscriptions.
Despite ill feeling surrounding the end of the Derby Mercury's association with the Dash, John Welch has been extremely helpful to us. He has written: "It has been both a memorable and satisfying association and we genuinely wish the villagers of Thorpe every success in the future. We'll be there!"

some photos from alan gifford. he is almost certain they are of the first race, but cannot remember who won. he rode a bike from place to place to take the photos. alan wishes us all well in keeping the race going - and wishes he was as fit now as he was then

ken broadhurst rang us in 2006 to say the first race was in 1952 and was called the 'all cyclists cross country run'. ken won the first six races. joe buxton was second. roy gregory was third and his brother keith was fourth. doug godlington was fifth and there were sixteen runners in all

doug godlington finishes in front of a cyclist, remembering that in the early races some rode bikes and others did the course in walking boots

​Derek Frith, who farmed at Thorpe Mill Farm, through his connection with the Thorpe Pasture Gait Owners meeting held with the National Trust, was aware that Derby Mercury was giving up the event, and that other clubs were interested in taking it over. It was clear that the event had the potential of raising anything up to £1000 which could be used for local causes. As a result of Derek's initiative, a meeting took place in January 1988, and by May, a committee was formed which negotiated with the National Trust for a licence to use the Pastures for the event. This committee is called "Dovedale Dash 88" to distinguish it from any previous organisation.

In 1988, with the help of information from John Welch, the event was organised by that committee, and a large number of villagers volunteered (or were volunteered) to help. The event took place on a fine and sunny 6th November when 1200 people entered and 600 cars arrived. The arrangements proved reasonable successful, and they formed the basis for future organisation.

Sadly, Derek Frith died in 1995. He is greatly missed, not only because of his work with the Dash, but also because of his many other activities locally. 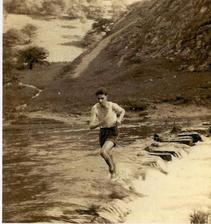 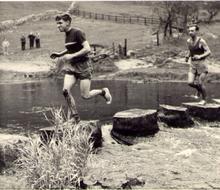