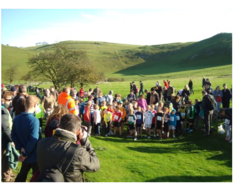 Second is Julian Goodwin from Boalloy Running Club (winning the Dog and
Partridge Tankard) (28:11) and Third is Stu Huntington from the City of
​Norwich AC (a long way from home!) (28:22).

First Lady is Sheena Allport from Thames Valley Harriers in a time of 32 mins
and 21 secs. Sheena wins the Peveril of the Peak Cup. Sheena also won the Dash
in 2012. Second Lady is Sally Newman from Calder Valley Fell runners (35:25)
(winning the Cyril Challinor Shield) and Third is Lily Winfield from Heanor RC (35:31).

The Under 18s and Under 14s did really well this year and ended near the top !
​Fantastic, well done !

First Under 18 and 15th overall is Oliver Sadley from Staffordshire Moorlands AC in a time of 30 mins and 28 secs. Oliver a local boy who lived in Thorpe before wins the Ian Hall Cup. Second is Greg Jones from Nuneaton Harriers (30:58) and Third is Louis Forshaw Porring from Buxton AC (32:01).

First under 18 Girl is Helen Thornhill from Buxton AC in a time of 37 mins and 2 secs. Second is Laurie Butler (38:28) and Third is Catherine Podmere from Sale Harriers (41:48).

First under 14 Girl and 3rd Women overall (Well done !!) is Lily Winfield from Heanor RC in a time of 35 mins and 31 secs. Second is Michaela Dick from Matlock AC (37:17) and Third is Anastasia Stock Clarke from Charnwood (41:08).

First over 60 and winner of the Dorris Allen Salver is Harry Knowles from the City of Norwich AC in a time of 36 mins and 41 secs. Second is Clive Russell from OREAD/Matlock AC (43:11) and Third Clive Catlin (47:43).

First local Thorpe man home and winner of the Bluebell Cup is Robin van Vroenhoven in a time of 38 mins and 27 secs (well done Robin!).

First local Thorpe lady home and winner of the Matthew Parris Cup is Katherine Round in a time of 47 mins and 25 secs (well done Katherine!).

The Mini Dash around Thorpe Cloud attracted 76 children from as far away as Northumberland. The winner was Patrick Welsh from Clifton School in a time of 9 minutes 51 seconds, and the winning girl was Rosa Allen. For the Under 8 category, the respective winners were Alex Currie and Molly Emerton. Once again, the winning school was Clifton, with the most high ranked competitors.

Last year we worked with a new finishing system aiming to give everybody a time and position and no queues at the finish. The latter hasn't quite worked. At some point a large queue did form, apologies for that. This means that at some point the timings became inaccurate and we stopped recording time at around the 700th finisher. We hope you kept your own time if that was important to you. Below you should find your position based on your name and number. Apologies for any misspellings - it is quite difficult to read some of your handwriting. You can enter your position on your finishing certificate.